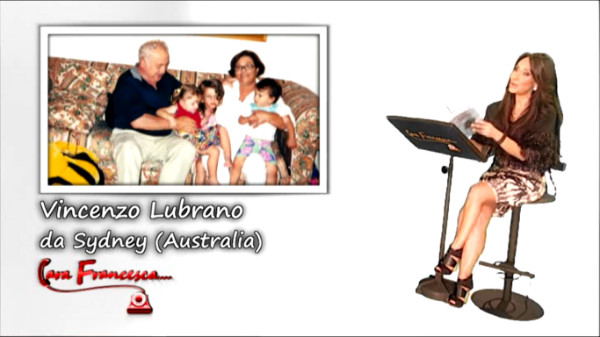 Cara Francesca produces a piece on our Vince

Whilst in Italy last October, my father Vince made contact with the producer of a show called “Cara Francesca”. The show is based in Italy but is broadcast internationally on RAI INTERNATIONAL which is the equivalent of our ABC.

Cara Francesca tells stories of Italians around the world that have contributed to the wealth of Italy from a cultural and social perspective. They recognise the contributions that the Italian Migration has made to the Italian Economy.

In the post-war period, thousands of Italians – mainly from Sicily, Calabria, Campagna (Napoli) as well as from the North (Veneto, Piemonte) emigrated to countries such as Australia, USA, Argentina, Brazil and Canada.

The resulting benefit for Italy was threefold:

Vince’s story is a typical migrant story and has been recognised by the show Cara Francesca where he tells his story of post-war Italy – the hardships and the joys of building a business and raising a family.

Please see the link below for Vince’s story (in Italian).

Vince’s book is still available (in English), so please ask us for a copy and we will gladly send you one!!!